Over the course of several years, I've heard a lot about becoming a specialist in my industry (web development). Many people focus on design, some focus on front-end development, some focus on backend frameworks. Many people even take that further. Some designers only design for iOS and some only for the entertainment industry. Some front end developers specialize in SASS or Javascript frameworks. Some rails developers specialize in big data or geospatial intelligence.

What do I specialize in?

This March will be my 6th year in business. I've been trying to redesign my website and rewrite copy and the message I want people to know about what I do. It's got me thinking: Shouldn't I be a specialist?

UX Thursday: The Rise of the...

I was listening to Jared Spool speak at a recent event called UX Thursday. He made some great points about the intent of design throughout the talk, but some of the things he said towards the end really resonated with me. Let me give you a brief background.

The title of the talk was It's a great time to be a designer, and towards the end he said that after all these years of trying to convince companies that design matters, they were finally listening. But now suddenly, we (as designers) have to back up the talk. He read an old Chinese proverb: "Be careful what you ask for, lest it become so".

The problem now is finding good designers. Jared's company does research and helps companies attract and retain good designers. During a recent study, they asked many design team managers: What skills are found in the best design teams? What he got back was quite a large list of skills. Then trying to narrow the scope, he asked, What separates out the best designers? He was expecting a single skill or characteristic that set apart great designers from others (remember his goal is to find the best designers ...if he could hone in on this one important skill, he'd be able to seek them out and recommend them for hire). Well, what he got back was this: 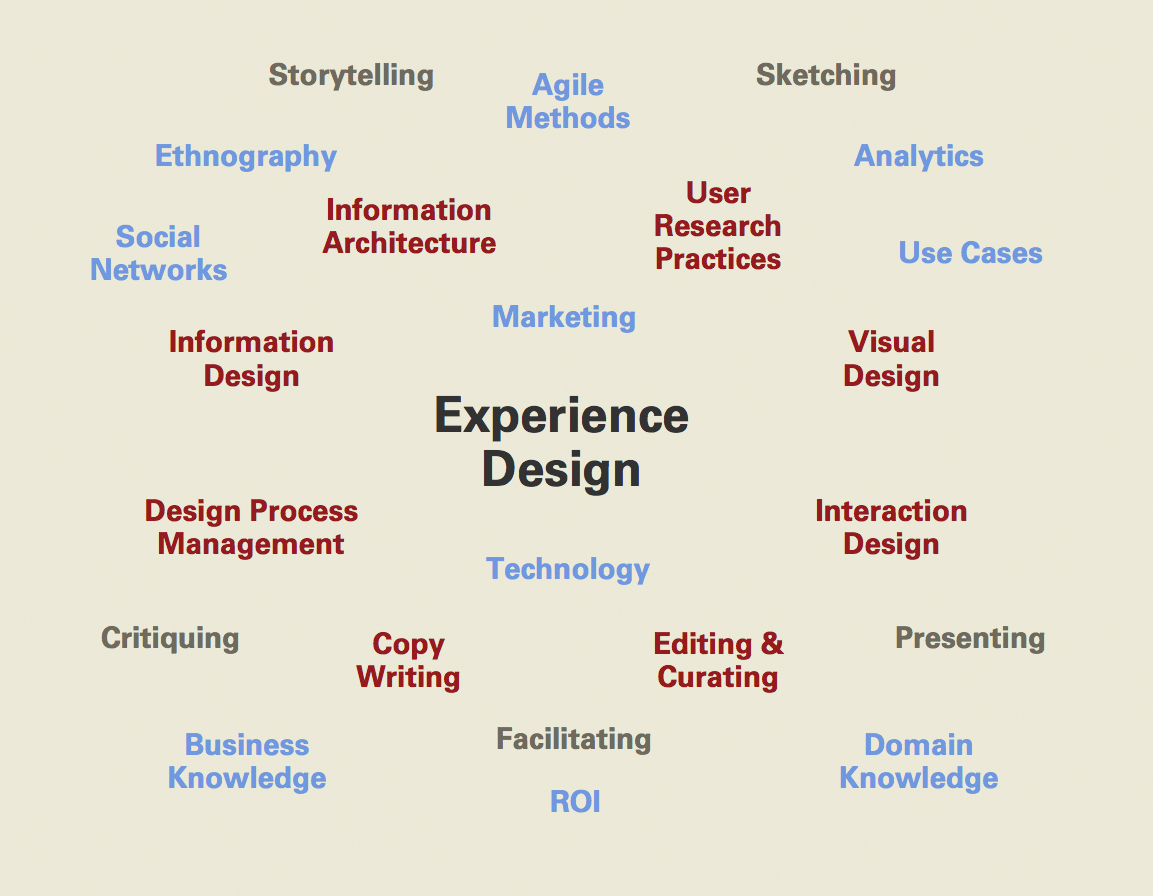 When I saw this, I remember being overwhelmed and thinking, if I was looking for a UX job, I might just get up and walk out, because I'll never be great at all those things.

Then Jared presented his thesis of the presentation: The Rise of The UX Generalist. Let's explore some terms: 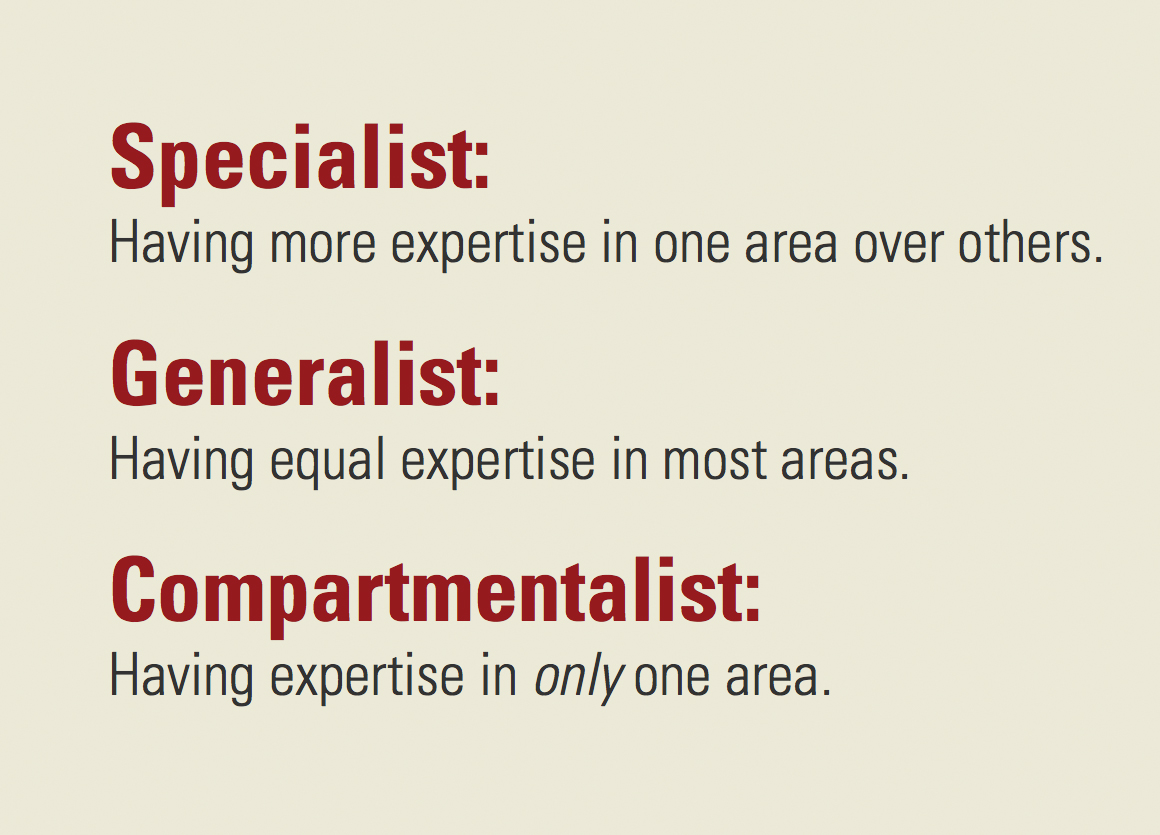 So what's the moral? For me it was you can't choose to not be good at many things and only try to focus on one speciality...they're all to intertwined. I have a feeling there are a lot of compartmentalist designers and developers out there, for it's easy to ignore one some areas and only focus on a few. The best will be good at many skills, and some who have been well rounded for a long time may become a specialist over time.

I've been rereading Linchpin. If you're not familiar with the book, it's about breaking out of a factory mindset where jobs are broken down into specific tasks and become part of an assembly line in a factory. Instead he seeks to introduce us to the Linchpin. A Linchpin is someone who can bring it together and make a difference, someone who thinks outside the box, an artist: someone with a genius for finding a new answer, a new connection, or a new way of getting things done.

The point of the book is that great work doesn't come from perfection and it certainly doesn't come from being average, but it comes from solving problems that people haven't predicted and for which no job description exists. He talks about Marissa Mayer:

Marissa has created billions of dollars' worth of value in her time at Google. Yet she's not the key brain in the programming department, nor is she responsible for finance or even public relations. Marissa is a Linchpin. She applies artistic judgement combined with emotional labor.

Marissa led the way in Google's now-cherished user interface. Is/was she a specialist? Here's an excerpt from her wikipedia page:

During her 13 years with the company, she was an engineer, designer, product manager and executive. Mayer held key roles in Google Search, Google Images, Google News, Google Maps, Google Books, Google Product Search, Google Toolbar, iGoogle, and Gmail. She also oversaw the layout of Google's well-known, unadorned search homepage. In her final years with Google, she was Vice President of Local, Maps, and Location Services and, before that, vice president of search products and user experience.

Interesting, she about did it all. Now she's CEO of Yahoo!

Specialization might give you a temporary boost in productivity, but it comes at the expense of overall functional cohesion and shared ownership.

I'm not going to be too eager to specialize in anything just yet. I enjoy helping clients and offering them an opinion that that isn't limited to one technology. Of course, you can't be everything to everybody, so there is some relativity here, but in my arena, it's being able to take a web app from start to finish: concept, planning, project management, design, development, deployment and support. One of my favorite parts of my job is learning, improving and exploring. Specialization doesn't eliminate that, but it definitely narrows the scope.