Have you seen the new twitter analytics? I've been a twitter user since about 2009. I've done a lot of consumption and responding to others, but my attempts at building much of a following haven't been very successful. I admit, I haven't tried very hard. Sometimes I go through spells where I'm devoted to sharing and reporting things, but other times I'll go months without tweeting or even opening twitter.

When I do tweet, I usually use Buffer to send out tweets and to post to other platforms like Facebook, Google+ and LinkedIn. Buffer also offers some analytics. My typical tweet would go out to my 350 or so followers, and I'd occasionally get maybe 1 fav, one clicked link, or one @mention. If I had to guess I'd say I'd get 1 of those around every 3 tweets. Needless to say, I've always been disappointed with this amount of interest in things I've found interesting. What was wrong with people anyway?

Well, I guess you could say the competition is tough. You're competing with the voice of millions...and not just mere normal folk like me. There's presidents of countries, rock stars, amazing athletes, brilliant scientists, successful entrepreneurs, and of course, the Ashton Kutcher's and Kardashian's of the world.

So back to analytics. I'm not sure when they released it, but I think it was fairly recent. It was neat to see new insight into the readership (or lack thereof) of my tweets. 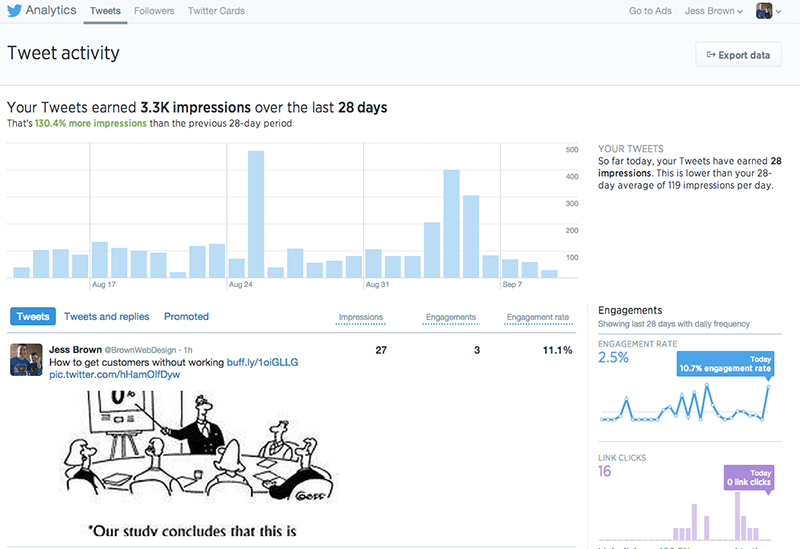 The first think I looked at was impressions. This is a number that buffer doesn't give me. My big surprise was the low number of impressions that I got. Out of 350 followers, I'd say I receive an average of about 50-60 impressions, which is about 16%. On one hand I'm a little relieved that would help explain a lack of interaction. But, on the other hand, it'd a little disappointing that only 16% of my tweets are even showing on people's feeds. I assume that probably half or less of those are even read given the skim nature of reading a feed.

So that is interesting, but how to increase it? Maybe tweeting different times of the day, maybe tweeting the same tweet more than once? Could it be that people use lists and though they follow me, I'm not on a list that they read the majority of the time?

Another interesting thing. I got a retweet (don't get much of those :) about my 30 day blogging challenge. It was by a user who has about 3700 followers. My impression count for that went to 275. If you take away my average of about 55, that's an impression rate of 6%. That's a good bit lower than my 16%, but that makes sense to me, I'd expect retweets to get a lower number of impressions.

Engagements are the total number of times a user has interacted with a tweet. This includes all clicks anywhere on a tweet (including hashtags, links, avatar, username and tweet expansion) retweets, replies, follows and favorites. This also gives you additional information than buffer could. So if a user does anything with a tweet besides read it, it shows up here.

My engagement rate isn't too bad considering my impressions.

I mixed in my feelings. I'm a little more understanding of the lack of engagement, but still struggle with how to interact more and build more of a substantial following. At least, I guess that is a goal. If you want to market yourself and be in the mix for business, you need supporters, buyers, friends, etc.

What do you think? How do your numbers compare to mine?